Posted by Keith Haney Racing at 8:13 AM 2 comments:


Posted by Keith Haney Racing at 8:19 AM No comments:

Posted by Keith Haney Racing at 7:08 AM No comments:

Keith Haney pedals way to an ADRL round victory at Charlotte

Haney and Guest finally ready to make 2012 debut in ADRL

Instead the duo find themselves headed to this weekend's ADRL Summer Drags VIII at U.S. 131 Motorsports Park bracing for their first race of the year, with Haney entered in the Pro Nitrous category and Guest ready to fight for the Pro Mod title.

"We expected to run for the glory this year," Haney said. "Now we'll be playing the role of spoilers. But hey, that's okay. We're finally ready to race and no one is more fired up about Martin, Michigan, than me and Monroe."

After being plagued by engine problems in preseason testing and beyond, Haney made the switch to Reher-Morrison horsepower and now feels he has an engine program that will make his two-car team competitive at the top level of the sport. As he was swapping power programs, Haney also bought out John Woods' stake in the team to allow his good friend time to take care of some personal issues.

"It's been quite a journey these last few months, and a costly one at that, but we all felt that if we showed up at a racetrack, then we'd show up with a genuine chance to win," Haney said. "We didn't want to just come out and race for the sake of racing. We want to compete and contend every time out.

"We've had some hurdles, and we've changed some personnel and added Jeff Pierce and Jeff Holloway to the team as our new crew chiefs. We've tested a bunch at Tulsa Raceway Park (which Haney owns) and we've held some great drag races over there to keep our juices flowing. Now it's time for me and Monroe to get back to racing our cars and having fun ourselves."

Haney points to the professionalism and hands-on work with Reher-Morrison as the main reason he and Guest are back on track this soon after such massive changes within his organization.

"I can't say enough about Brad Morgan and Kyle Bates from Reher-Morrison," Haney said. "They offer the best service, bar-none, in the racing business. Just unreal guys to work with; they even came to the track to test with us to make sure we're happy. They're helping us get on our feet, and that's awesome.

"We're ready. Monroe has been driving like a rock star and our Camaros are running as consistently as bracket cars. My guys -- John Collins, Allen Marrs, Andrew Arnold and Randy Hancock -- have been so strong. I expect us to be competitive right out of the trailer this weekend. Look out everyone, here we come." 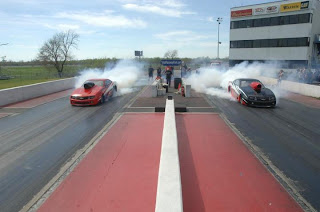 For additional information, visit Keith-Haney-Racing on Facebook, www.KeithHaneyRacing.com or www.MonroeGuestMotorsports.com. Marketing inquiries or appearance requests for the team can be directed to Allen Mars at allen.marrs@saveongm.com .
Posted by Keith Haney Racing at 6:54 AM No comments:

Visitors of Tulsa Auto Show will be the first to see the Haney team's 2012 Camaro race cars!

Racing fans eager for a first glimpse at the new 2012 Chevy Camaro racing body need to look no further than the Tulsa International Auto Show, running March 15-18 at QuikTrip Center.
A pair of brand-new Performance Auto Camaros will be on display at the show thanks to driver/owner Keith Haney, car owner John Woods and driver Monroe Guest. The first will be featured in the Chevrolet display and the second will be the centerpiece of the Tulsa Raceway Park booth.
"We're so excited to be racing these cars this year and we can’t wait for the fans to see them," Haney said. "We want to generate a lot of excitement for our ADRL racing season, which starts at the end of the month."
A local resident who owns Classic Chevrolet, Haney said giving the Tulsa show attendees the honor of seeing his new race cars first was an easy choice to make.
"I'm an Oklahoma guy and an Oklahoma businessman," Haney said. "I wanted to give fans of the show a taste of the excitement that both the Chevy brand and Tulsa Raceway Park are offering in 2012."
Chevrolet and TRP are both close to Haney's heart. Haney has been a longtime Chevy dealer in the state of Oklahoma.
"Chevy is going to have its regular lineup of outstanding products at the show," Haney said. "Chevrolet has some of the safest cars on the road such as the Sonic and Camaro. The booth will have information about all of Chevy's great cars."
Over the winter Haney partnered with local businessman Todd Martin to keep Tulsa Raceway Park from being shuttered forever.
"We're excited about the events we've got planned for the track this year," Haney said. "We've got a huge opening weekend planned for the end of the month. I know a lot of racers are going to be at the show, so I'm hoping that seeing our cars will get their blood pumping and they'll get signed up to race all summer long."
The Tulsa International Auto Show gets under way at 2 p.m. Thursday at QuikTrip Center. Doors open at 2 p.m. Friday, 10 a.m. Saturday and 11 a.m. Sunday. The show closes at 10 p.m. each night, except Sunday when it closes at 6 p.m. Admission is $8 a day with children 12 and under admitted free with a parent.
For more information about the show call 918-742-2626 or e-mail at taberadx@sbcglobal.net. For information about Tulsa Raceway Park log on to www.tulsaracewaypark.com or www.keithhaneyracing.com.
Press Contact: Geiger Media at 832-971-9345 or rob@go2geiger.com.
Marketing inquiries or appearance requests for the team can be directed to Allen Mars at allen.marrs@saveongm.com .
Posted by Keith Haney Racing at 12:03 PM No comments:

The latest from Haney Racing!

Greetings, speed freaks! Haney Racing is keeping up the pace this race season with some news for you. Get your calendars ready to mark down that the Tulsa International Auto Show is coming to town March 15-18th at the Quik Trip Center; located on the Tulsa County Fairgrounds. Feel free to bring out the wife (or for you lady speed freaks, bring out the husband) and the kids to take a look at where the auto industry is headed. Turn it into a scavenger hunt for the kids (or just your buddies) to see who can land the most car company swag, posters, and brochures! While you’re checking all the newest rides of each of the car companies this year, you better make sure to set aside some time to make your way over to the Chevrolet display area. Whether it’s heavy duty trucks, something to tote the family around in, or environmentally-friendly cruising in Chevy’s all-new electric Spark, the 2012 Chevrolet display is sure to wow the crowds this year. In addition to showing off Chevy’s best, be sure to check out the 2012 Chevrolet Camaro Pro Modified Drag Racing Car that will be on display; but please, do your best to keep the drooling to a minimum or else they have to pay for additional janitorial services. This screaming-fast Camaro, along with its sister Camaro Pro Nitros Drag Racing Car will compete along with the full American Drag Racing League (ADRL), racing 10-race season all around this great country of ours’ this year. If you’re in the mood for a road trip, the season opener this year will be down south at the Royal Purple Raceway, just outside of Houston, TX. These two muscle machines were built and are being driven by the previous National Hot Rod Association (NHRA) Oklahoma Champions. That’s right; there are Okies behind the wheel and the wrenches of these lightning-fast Chevy beauties! So, be sure and mark your calendars for March 15th through the 18th to make a day (or a couple days) of ogling over the latest cars, trucks, SUVs, vans, and all the other displays at the Tulsa International Auto Show. While you’re there, bring the family by the Chevrolet display to see the 2012 Chevrolet Camaro Pro Modified Drag Racing car; a beast that is sure to tear up the drag strips up all over the country this racing season.
Posted by Keith Haney Racing at 3:19 PM No comments:

North Adams, Massachusetts (January 25, 2012) -- RacingJunk.com is proud to announce that under a new partnership agreement, it is now an official sponsor of Tulsa Raceway Park, a proven testing ground for many professional drag racers in Tulsa, Oklahoma.

RacingJunk.com is the world’s largest online motorsports marketplace. Their free online classifieds include extensive listings of performance products and services, from the smallest engine parts to complete race cars.
“ is a welcome addition to our growing network of partner tracks,” said Jeff Kurpaska, Raceway Media Director Business Development.  “Tulsa Raceway is a great venue with an exciting 2012 racing schedule.  We’re honored to be a sponsor and know that the free classifieds on RacingJunk.com will be a valuable resource to their community of racers and fans.”
“We’re very pleased to welcome RacingJunk.com as an official sponsor,” said track operator and racer Keith Haney.  “RacingJunk.com has so much to offer grass roots racers, and I know the racers and fans at Tulsa Raceway will appreciate their free classifieds and their sponsorship.”
The RacingJunk.com network is unparalleled in the automotive and performance industry, with over 100 partnerships, including top sanctioning bodies, the country’s largest race tracks and many of the most popular series and shows. RacingJunk classifieds are published across an extensive network of performance websites, including SPEED, Grassroots Motorsports and Super Chevy Show.


ABOUT RACEWAY MEDIA
Raceway Media, LLC, a Boxcar Media, LLC company, is a multimedia publishing firm serving the racing and performance enthusiast industries.  Their flagship property, RacingJunk.com, is a free “one-stop shop” for those looking to buy, sell, trade, entertain or interact with people throughout the automotive and motorcycle racing and performance communities.
The company’s holdings include RacingJunk.com and SprocketList.com, which together receive more than 70 million page views and 2.8 million site visits per month, and have over 590,000 registered members.  Raceway Media also owns CollectorCarNation.com and WideOpenGarage.com.
ABOUT
Tulsa Raceway Park is a 1/4 mile track that runs both 1/8th and 1/4 mile events throughout the racing season. The 2012 season begins on February 17, with a full schedule of drag racing, dirt drags and mud track events, as well as carnivals, concerts, swap meets, car shows and more.
Posted by Keith Haney Racing at 3:40 PM No comments: