'Dream Weekend' for Haney at Throwdown in T-Town


TULSA, OK (Oct. 18, 2017) - Days later, Keith Haney still can't quite believe he won the final event of the 2017 Mid-West Pro Mod Series (MWPMS) inaugural season, as well as wrapped up two MWPMS class championships during the Throwdown in T-Town, Oct. 13-14, at Osage Casino Tulsa Raceway Park.
"It was an absolute dream weekend; everything went just the way we planned, if that's even possible," Haney declared. "We didn't break anything, both cars were perfect, my crew chief, Brandon Switzer, he made all the right calls, and I don't want to sound like I'm bragging but the driver did his job, too. I really can't believe how smooth everything went. It just could not have gone any better."

Haney prevailed in the Pro Mod final thanks to a starting-line advantage over Jim Sackuvich to cap off a come-from-behind, championship-winning campaign in "Notorious," his nitrous-boosted 2016 Camaro. He doubled up with a semi-finals finish in "Enigma," a nearly identical-appearing second car that delivered the 2017 MWPMS Radial vs. the World crown for Keith Haney Racing (KHR).

"It was easily the biggest weekend of my drag racing career. And to be at home and have my friends and my kids, Logan, Madison and Alexis, here with me made it even more special," said Haney, a local new car dealer who also owns the Tulsa track with fellow racer Todd Martin. Additionally, he emphasized the "invaluable contribution and hard work" of crew members Dale Hancock, Cody Moore, Shane Goodnight, Trey Eberle, Cal Hancock, Farrah Fulps, Cole Pesz and Kimmy Pesz. "We had an honorary crew member with us, too, Eli Ramirez, a special-needs 5th grader from Jenks West Intermediate School, so it was really cool for everyone to have Eli share in the excitement with us."

A record 32 Pro Mod entries showed up for the 2017 MWPMS finale, with 28 making official qualifying attempts. Despite opting out of the third and final qualifying round on Saturday afternoon in order to coach his 10-year-old son's football game, Haney started on top of the 16-car race day field after running 3.77 seconds at 200.14 mph over the Tulsa eighth mile.

"I felt good about the time we ran in Q2 and obviously it wasn't going to get bumped out, but even if we hadn't been qualified I still would've left to coach the game. I have a lot of fun racing, but family comes first and I've also made a commitment to all my son's teammates and parents to be there as head coach, so that was never in question," Haney stressed.

Incredibly, Eddie Rogers, the MWPMS Pro Mod points leader heading into the Throwdown, struggled mightily throughout qualifying and failed to make the cut for eliminations. Then, in round two of competition, second-place qualifier Ron Muenks took out Jonas Aleshire, who was right behind Rogers in points, paving the way to the championship for Haney, who was third overall when the race began.

Rick Wilson and his '69 Camaro rounded out the quickest Pro Mod field in history with a 3.96 qualifying run at Tulsa, but slowed to 4.04 seconds in the opening round of racing against Haney, who went 3.84 to advance to the second round. Once there, he ran a solid 3.80 to easily defeat an off-the-pace Taylor Lastor before facing Branden Lewis and his supercharged '57 Chevy in the semi finals. Haney admitted he did a "classic bad job at red lighting," as he left with a no-margin-for-error .001 reaction that allowed his 3.81-seconds pass to beat a much quicker 3.77 by Lewis.

That set up the final-round match with Sackuvich, who started his nitrous-fed '69 Camaro from the number-three slot before running low elapsed time for each round in dispatching Clint Satterfield, Wayne Roberts and Muenks with a 3.766 pass in the semis that gave him lane choice over Haney. When the green light flashed for the final time, though, Sackuvich posted his worst reaction time of the day while Haney left with a sizable .067 advantage prior to making his quickest and fastest run of the weekend at 3.77 and 200.68 mph to negate a quicker and faster 3.75 at 200.80-mph pass by Sackuvich in the left lane.

In Radial vs. the World, Texas racer Brandon Pesz had been driving "Enigma" for Haney at four previous MWPMS events this year and based on the strength of one win and a runner-up finish, he had the car on top of the points standings. With a prior racing commitment, however, Pesz was unable to compete at the Throwdown, so Haney stepped in for his first "twofer" experience as a driver in competition. And unlike Pro Mod, where points are not transferable between drivers, the MWPMS awards RvW points to team owners since multiple drivers throughout the year are common in the class.

"That's what allowed me to step in and help win the championship for our team," Haney said. "It was my first time ever driving both cars at a race, but Brandon would have been in it if he could have so I'm just happy I could help him out and finish what he started for our team."

Oklahoma's own DeWayne Mills arrived for the Throwdown second in MWPMS RvW points behind KHR and earned the number-one start over 11 other racers with a 3.821-seconds pass at 208.46 mph in his twin-turbocharged '68 Camaro. Starting second in Tulsa was Daniel Pharris, with third-place points contender Mark Micke also third in qualifying, Haney qualified fourth in his Enigma machine, and fourth-place points man Mark Woodruff fifth on the qualifying list.

Along with Scott Lowery, Mills, Pharris, Micke, Woodruff and Haney advanced from the first round, but in round two Mills would defeat Lowery, Haney would take down Micke and Pharris put an end to Woodruff's title hopes. The win also earned Pharris a bye through the semis and though Mills put Haney on the trailer, he had become mathematically out of reach of the KHR team for the championship. Unfortunately, however, threatening weather arrived late Saturdaynight just before the RvW final between Mills and Pharris, so the race was cancelled and the purse split.

Haney said he donated half of the $10,000 he received for winning the Pro Mod race to Chad Reynolds of Bangshift.com, who was running the live online feed from the Throwdown, as well as racing the Chevy station wagon previously campaigned by his wife, Daphne, who recently succumbed to cancer.

"I don't do this for the money," Haney said shortly after the Throwdown race win and MWPMS championships were secured. "I do it because I love drag racing and I want to see it prosper and flourish. I want to keep racers and fans interested in what we're doing and I want them to have fun, too.
"Right now, though, I'm honestly at a loss for words, and that doesn't happen too often, as anyone who knows me could tell you. It was a truly amazing weekend, the best I've ever had since 2007 when I got started in racing. I don't know if I'll ever be able to top it, but it's one that I'll never, ever forget, that's for sure."

TULSA, OK (Oct. 10, 2017) - Fresh off a second-round finish with his drag radial-equipped entry at No Mercy 8 in Valdosta, Georgia, veteran driver Keith Haney now has his sights set on returning home for Throwdown in T-Town at Osage Casino Tulsa Raceway Park. Haney, a local new car dealer who also co-owns the Tulsa drag strip with fellow racer Todd Martin, will compete this weekend (Oct. 13-14) in two cars entered in two distinct classes for the Throwdown, which promises to be one of the biggest races nationwide this year.


With a 3.91-seconds pass at 197.36 mph over the eighth mile at South Georgia Motorsports Park (SGMP), Haney qualified "Enigma," his nitrous-oxide-boosted 2016 Camaro

19th for the event's top-level, 32-car Radials vs. the World field.

"No excuses, but we were trying out a whole new setup and that put us a little behind in qualifying," Haney explained. "Then, just before the final round of qualifying we realized we were nearly 150 pounds overweight with the car so we took more than a hundred pounds off, but didn't compensate enough for it and the nose came up and stayed up and I had to get out of it and that's what put us so far down the ladder."

After his first-round opponent was unable to make the call to race, Haney posted a solid 3.92 on a solo pass, but knew he'd have to step up again in round two against third-place qualifier Steve Jackson in his supercharged 2015 Camaro. With crew chief Brandon Switzer calling the tune-up, Haney opened with a stellar .013 reaction time, then made his quickest run of the weekend at 3.89 seconds, but finished just 17-thousandths of a second behind Jackson, who went on to finish runner-up in the final against DeWayne Mills


"We didn't win but we made a respectable run against Stevie and it was good to see a fellow Oklahoman take home the race win, so congratulations to DeWayne," Haney said. "I also want to thank the track owner Ozzy Moya and everyone at SGMP and Lights Out; they were all super awesome to our race team and really made us feel good about being there."


That said, Haney is very much looking forward to getting back on his home turf this weekend, where he will enter Enigma in Radial vs. the World within the Mid-West Pro Mod Series portion of the Throwdown, and "Notorious," his almost identical appearing, Larry Jeffers-built 2016 Camaro in the even quicker and faster Pro Mod class for so-called "big tire" cars.
"Brandon Pesz has been driving the radial car so far this year and right now it's number one in Radial vs. the World points, and my other car that I've been driving all year is currently third in Pro Mod points," Haney said. "The good thing is we've got an even better tune-up figured out now for the radial car now and Notorious has been good all year so we've got a legitimate chance to win both championships in one day if things just go our way. To say I'm excited about the opportunity would be a huge understatement."


In addition to Radial vs. the World and Pro Mod, which currently has 28 confirmed pre-entries for Throwdown in T-Town, the Tulsa event will feature several more eighth-mile drag racing classes, including a special MX 235 drag radial division that will pay $20,000 to the winner, headlining the largest race day purse ever for the class 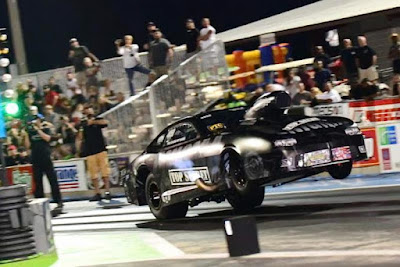 Haney raced to a 2nd-round finish in Radial v. World this past weekend at No Mercy 8 in Valdosta_ GA

Posted by Keith Haney Racing at 2:22 PM No comments: