Keith Haney is in the middle of a terrific season with his Keith Haney Racing team, a testament to the talented, hard-working crew members who support KHR's "Notorious" and "Enigma" race cars. Notorious is the Lucas Oil/RacingJunk.com Chevrolet Camaro Pro Mod, while Enigma is KHR's drag radial race car. Both have performed well this season, under the tuning of Brandon Pesz and Brandon Switzer. 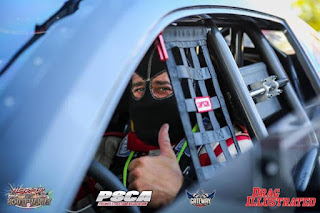 KHR experienced a particularly strong race its last time out at Gateway Motorsports Park earlier this month. Enigma, driven by Pesz, won the Premier Street Car Association's Radial vs. The World Class, while Haney and Notorious qualified No. 1 and reached the final round of the Mid-West Pro Mod Series.
"The year's been good," Haney said. "The Pro Mod's only been out a couple races, and it's done well. No. 1 qualifier and goes to the semis in the first, and No. 1 qualifier again in St. Louis. It went to the final there, and the transmission goes out.
"Enigma's done great all year long, from Light's Out to Radial Revenge Tour to the Throw Down and St. Louis. The car's been great, and we keep getting faster.
"It was almost a perfect weekend." A broken transmission cost Haney a chance at a KHR sweep in St. Louis, but to win the drag radial race and reach the final with the Pro Mod was quite the accomplishment. Haney campaigned with only himself and four crew members there, but tuning by Pesz and Switzer led to a terrific weekend. 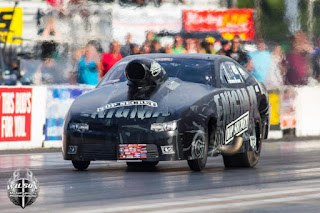 "We go straight up to qualifying and go," Haney said. "No testing, no nothing. That's how confident in the program these two guys are - Brandon Pesz and Brandon Switzer. It's all about the preparation. I've got these boys who are rocking it, and there's no headaches. Everybody knows their job, and everybody's doing it." Haney credits crew members Dale Hancock, Cale Hancock, Trey Eberle, Shane Goodnight and Cody Moore for their dedication to KHR. Haney has had some personal issues in 2017, but the race team has performed well.

"We've been consistent all year long," Haney said. "We've had fewer issues, fewer problems. Brandon Pesz and Brandon Switzer have been amazing tuning the car. We've been trying the new Lucas Oil transmission fluid, and it's been great. "It's been a roller-coaster personally for me this year, but the racing program has been spot-on.

It's nice to have. Our fans have been great, buying a lot of merchandise online and at the track. Our Facebook and online numbers are going up every month. We've got a lot of trash-talking videos online, and we back every one of them up." And he's hardly done. 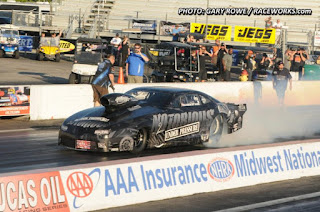 Posted by Keith Haney Racing at 3:07 PM No comments:

MADISON — Gateway Motorsports Park welcomed the Premier Street Car Association (PSCA) and Midwest Pro Mod Series along with the NHRA Jegs Super Quick Series this past weekend for an independence weekend heads up and sportsman racing showdown.
A total of 110 cars qualified across five heads-up classes and the Jegs Super Quick series, 56 of those were Super Quick racers. The GMP track did not disappoint and that could not be more evident than with the quick E.T.’s and top speeds laid down all weekend long.
"Thanks once again to the amazing racing surface provided by the staff at Gateway, our drivers were able to put on an incredible show,” said PSCA President Mel Roth.
The quickest class was Pro Mod where the winner took home a $10,000 pay day. There were 13 Pro Mods that qualified for the field with Keith Haney of Broken Arrow, Okla. taking the pole with a 3.782 at 201.13 mph. Granite City resident Rob Hogle qualified 13th with a best E.T. of 4.903 at 142.15. 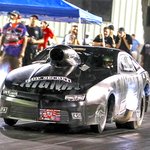 Haney, who is also the head of the Midwest Pro Mod series, led the way all weekend right up to the final. Demotte, Ind. racer Jason Hamstra put his supercharged ’69 Camaro sixth on the qualifying sheet and improved E.T.’s as race day progressed to the final against Haney.
In the final, Haney experienced a mechanical issue when attempting to fire his ’15 nitrous-aided Camaro, handing the uncontested win to Hamstra. Knowing he had the win in hand, Hamstra still put his foot to the floor and ran his best E.T. of the event.
Radial vs. world (RvW) provided the second quickest field of the event. The top qualifier was Dwayne Mills of Sand Springs, Okla. with an E.T. of 3.853 at 204.14 mph.
The RvW final was another all Chevy showdown with Broken Arrow, Okla. resident Brandon Pesz and Mark Woodruff of Arnold, Mo. Pesz qualified Keith Haney’s RvW Camaro middle of the pack, but improved with every pass during eliminations on Saturday while Woodruff was putting up strong numbers all event. With a reaction time advantage, Pesz never looked back edging Woodruff 3.874 to 3.904 E.T. 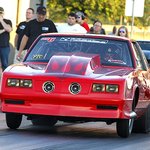 The X275 field was 13 cars strong, which included local racer Tim Gehrs of Roxana. The field also included racers from Ohio, Texas, Arkansas, Oklahoma, and Missouri. The top qualifier, Phil Hines, ran a quick pass of 4.461 at 161.38 mph and seemingly had the field covered until the final where he met up with Dexter, Mo. racer Cecil Whitaker. Whitaker had to overcome a huge wheel stand where his Camaro came down hard on the front end to make the final against Hines.
With the advantage off the line, Hines never looked back in route to the win over Whitaker. If he had looked back he would have seen Whitaker right on his bumper. Hines needed every bit of the 4.448 E.T. because Whitaker would run 4.499 E.T. 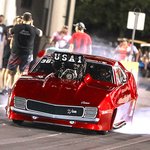 Other winners on the weekend included Shane Stack of Huntsville, Ala. over Jason Rueckert of Terre Haute, Ind. in Limited Drag Radial, Brian Edwards of Bloomington over Jason Collins of Blue Springs, Mo. in MX235 and Mike Eggleston of Highland over George Atchison of Centralia in Jegs Super Quick action. 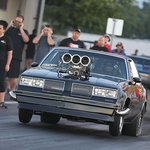 This was the kind of action fans can expect when a lot of the same cars and many more invade GMP in August.
“What we saw Saturday with the Pro Mods and Radial cars is just a small preview of what you're going to see Aug. 3-5 when we come back to Gateway for Anarchy at the Arch IV. The Midwest version of our Street Car Super Nationals has been a record-breaking hit for our fans and racers and we're ready to do it again next month,” said Roth. 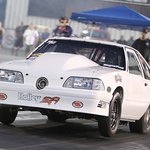 Posted by Keith Haney Racing at 6:31 PM No comments:

MADISON, Ill.—Jason Hamstra earned the Mid-West Pro Mod Series victory Saturday at Gateway Motorsports Park when top qualifier Keith Haney was unable to stage his car due to a transmission issue. The win capped off an incredible two days of racing at the second running of the Premier Street Car Association’s Heads Up Hootenanny.
The event, postponed from its original date in April due to rain, featured five heads-up classes fielded by PSCA along with the JEGS Super Quick Series and the track’s Gateway Bracket Series, providing a preview for next month’s Street Car Super Nationals: Anarchy at the Arch IV.
Hamstra qualified sixth and laid down an impressive 3.816-second ET at 196.93 mph on a solo pass after Haney was unable to put his car in gear. Despite wanting to earn the victory against Haney on the track, the Indiana native said he’ll definitely take the win light.

“It went pretty good there at the end,” Hamstra said in the Winner’s Circle. “We figured out we had a bad set of tires on it all weekend and put the old ones on it for the semifinals and the car started going down the track again like it should be.
“I’d like to race (Haney), sure, but you take it any way you can get it. We had to get there. You have to be there to take advantage of opportunities like that.”

A visibly-perturbed Haney got out of his car to watch Hamstra make his winning pass while shaking the hands of the victorious team members. He did get a boost immediately thereafter when Brandon Pesz, driving a Keith Haney Racing machine in the Morrow Bros. Ford Radial vs. The World class, took the win over Mark Woodruff. Pesz, qualifying fifth, crossed the line with an ET of 3.874 seconds at 196.46 mph.
“That’s the first win on it,” Haney said of his radial car in only its fourth-ever race. “It was pretty consistent…we didn’t get to make the first qualifier or the second because it sheared the bolts off the flywheel. So Brandon got here, we stuck him in it and it got a 4.08. The car’s really consistent.
“Both cars made it to the finals and there’s something to be said when you’ve got two cars in the finals.”
Posted by Keith Haney Racing at 10:59 AM No comments: