Enders-Stevens will race in Dragstock X on Sept. 6-8 at Rockingham Dragway in Rockingham, N.C., and then in her hometown event, the World Finals IX, on Oct. 19-20 at Royal Purple Raceway in Baytown, Texas. Brandon Pesz of Lethal Acceleration will continue as crew chief.

Enders-Stevens, a native of Houston, raced for Haney in Memphis, Tenn., earlier this month,
Erica Enders-Stevens
marking the first time she drove a nitrous-powered race car. The five-time NHRA winner qualified for this year's Countdown to the Championship in Pro Stock, but her Cagnazzi Racing team has been sidelined because of lack of sponsorship.

"I'm really excited to have been invited back to drive for Keith," Enders-Stevens said. "That was a really fun opportunity in Memphis, and given some more time in the car it will only get better. I'm glad to be going back."

"It was really, really good for her and good for Sportsman racing," Haney said. "It was amazing for us, too. We just keep growing."

Plus, it's good for the ADRL, and league co-founder Kenny Nowling knows it. He offered the team free entry and free testing for Enders-Stevens' appearances in the remaining ADRL races.

It's also good for Enders-Stevens, who loves racing in Houston. After the race in Memphis, she immediately inquired about racing again for Haney.

Houston has always been special for her, as it was the site of her first national event victory, in Super Gas in 2004.

"I'm so glad to be going back home," Enders-Stevens said. "We raced there in April and didn't have the best of showings, so to be able to have another opportunity in a car with twice the horsepower is really cool. I'm looking forward to it."

As an added bonus, husband Richie Stevens will be part of Haney's crew in Rockingham.

Posted by Keith Haney Racing at 7:42 AM No comments:

Posted by Keith Haney Racing at 7:41 AM No comments: 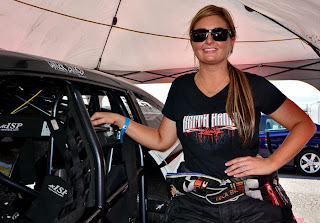 "We have some mutual acquaintances, including Rob Geiger, who is a good friend of mine and handles all my sponsorship stuff, plus he handles Erica's P.R. work," said Keith Haney, owner of the nitrous-boosted 2012 Camaro that Enders-Stevens will attempt to qualify Aug. 2, in ADRL Pro Mod. Haney also drives his own '12 Camaro in the class that adheres to NHRA rules. "Anyway, I was debating whether to drive both cars again, like I did at the X-DRL race in St. Louis about a month ago. That was fun, but it was also a lot of work, so I asked Rob if he thought Erica might be interested in trying out a Pro Mod. When he said she might be, all you can do is ask, so I just sent a message to her inbox on Facebook last Friday and simply said, 'Would you be interested in driving my Pro Mod at Memphis next weekend?'" Enders-Stevens said she didn't check her messages that weekend, admitting she was avoiding the computer because she was feeling downcast about missing the NHRA's "Western Swing" since her Victor Cagnazzi-owned team was sidelined due to a lack of sponsorship after 10 races this season. When she did finally see the message, though, she replied with a simple, one-word answer: "Seriously?!!!" When Haney, who co-owns Tulsa Raceway Park and is a Chevy dealer in Oklahoma, assured her he was indeed serious with his offer, a flurry of phone calls quickly went out to Cagnazzi and Enders-Stevens' sponsor reps at Chevrolet. 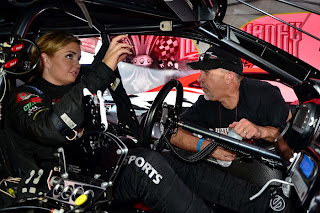 "I just had to get clearance from the people I answer to and that took most of the day, but they were really positive about it, although they did ask if I had lost my mind," Enders-Stevens said. "I told them I think I have, but I'm a crazy race car driver who'll do almost anything to get back in a car. "But seriously, I'm really excited about the opportunity. I talked to Richie (Stevens, husband) about it because that's where he got his start, in Pro Mod, and he thought it was a good opportunity. But Pro Mod is such an intimidating thing. I told Keith I've always admired the Pro Mod cars, but jokingly wondered why these Pro Mod guys paint their cars so pretty because they get stuffed in the wall so often. "It's certainly an intimidating class, an intimidating car, and I'm sure the learning curve will be significant, but I feel like I'm up for the challenge," Enders-Stevens continued. "I'm just so glad Keith gave me the opportunity." 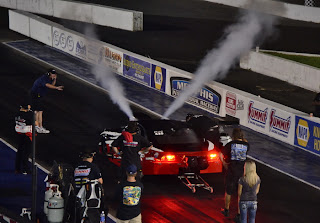 Haney spent much of Thursday afternoon with Enders-Stevens painstakingly going over starting procedures, nitrous purging, burnout practices and what to expect as the car progresses down the ADRL eighth mile. He realizes, of course, that Enders-Stevens is likely to be nervous, but insisted that compared to the Pro Stock Camaro she's used to wheeling, Enders-Stevens might even be "bored" by his Pro Mod version. "I told her on the phone yesterday, 'Here's the deal, I wouldn't put you in my car if I didn't think it was safe.' We've gone over everything probably 20 or 30 times, but it's really going to take going down the track a couple of times and she'll be fine. I'm very confident of that," Haney said. "Compared to her Pro Stock car, this car is easy to drive. She's in there (Pro Stock) grabbin' gears, making sure to hit the shift points dead on, watching the oil pressure, and with this one all she has to do is the burnout, back up, a couple of nitrous purges, stage it and let go of the transbrake button and the car will do the rest. I told her, other than steering and maybe pedaling it, once you let go of the button there is nothing more you can do to improve the run; it's all on us to give you the car to get it done. We set the tune-up, we adjusted the chassis, we set the wheelie bars, all the driver can do is drive at that point." In her first attempt on the track, Enders-Stevens was a little timid in the burnout, barely getting the big Hoosiers out back spinning through the water box. Since it was only a test run, ADRL officials allowed her to back up and try again, resulting in a nice, long smoke show to about a hundred feet past the starting line. She then backed up with confidence, quickly purged and staged, and launched into a planned shutoff at the 60-foot mark. 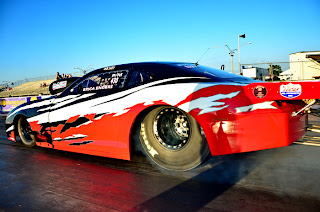 One more shot late in the evening went much smoother from the start, with Enders-Stevens taking off with both headers shooting flames into the Memphis night before the car drifted toward the right wall and she clicked it off a couple of hundred feet out. After watching her husband compete in ADRL Extreme Pro Stock several times over the last couple of years, though he's not currently racing, Enders-Stevens is very familiar with the ADRL, its procedures and its atmosphere. She said she's looking forward to joining the fray. "It's such an exciting deal running to the eighth mile, the wild and crazy cars, and the people are just awesome here; it's like a big family deal. I mean, if you walk uninvited into somebody's pit in the NHRA you might get shot; not really, but it's so different here where people from other teams come over while we were warming up, talking, looking over our motors; it's just so different here; very enjoyable and I'm just glad I get to participate as a driver instead of just a crew member." And despite her lack of familiarity with the Pro Mod class, Enders-Stevens said she hopes to qualify well and go a couple of rounds in eliminations on race day. "From the time I left Jr. Dragsters I've always been willing to jump on any opportunity I've been given to drive any kind of race car," she stressed. "This is definitely outside my comfort zone, but once I get a few passes under my belt I know that will change. This is a professional deal with top-of-the-line equipment, an established team, and a great opportunity for me and my sponsors to get some exposure while we wait for our Pro Stock deal to come together again."
Posted by Keith Haney Racing at 7:37 AM No comments: