'Throw Down in T-Town' sure to please Tulsa fans, insists track owner/racer HaneyTulsa fans, insists track owner/racer Haney
TULSA, Okla. (May 8) - Osage Casino Tulsa Raceway Park's Throw Down in T-Town has grown by leaps and bounds in its first handful of years, and this weekend's event is expected to be the best one yet.
"We're really excited about this race," said track co-owner Keith Haney. "We've got a little bit of everything out here for the fans. We'll have a nitro-powered Harley-Davidson making some passes, we've got a PT Cruiser that does wheel stands all the way down the track, and a $50,000 total payout to all the class winners. It's going to be non-stop excitement."
When the Throw Down gets under way Friday night, Haney will do his best to win back some of that prize money when he and teammate Monroe Guest get behind the wheel of their Lucas Oil Chevy Camaro Pro Mods.
"We'll test Monroe's car pretty hard this week before qualifying starts on Friday night," Haney said. "We're not going to have to touch too much on my car because we think we've got it figured out after we ran 3.95s (seconds) pretty much every time we went down the track last time out.
"So for now we're going to focus on his black car to get it dialed in to where my red car is."
Haney said he's especially proud of the large number of contingency sponsors who have come aboard to help sweeten the pot for the racers taking part in the event.
"We've got great contingencies on top of the big payouts," Haney said. "It's attracting a lot of the big names in Pro Mod racing. This Throw Down has gotten to be very, very big."
A few of the contingency sponsors who have come aboard include Neal Chance Converters & Pro Torque Converters, Lethal Acceleration, Stroud Safety, Trick Titanium, Jerry Bickel Race Cars, Five Star Bodies, Reher-Morrison Racing Engines, Aeromotive and Mickey Thompson.
"It's going so well that we've had six different tracks call us to put on a Throw Down at their facilities," Haney said. "That's a big deal for everyone who helps make this event happen."
Gates at Osage Casino Tulsa Raceway Park open at 5 p.m. Friday and 9 a.m. Saturday with eliminations starting at 6 p.m. Saturday. Free tickets for the event can be picked up Tulsa-area QuikTrip 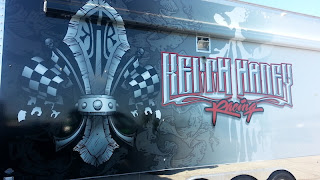 
TULSA, Okla. (April 2) - If last week's testing at Osage Casino Tulsa Raceway Park is any indication of what this weekend's X-DRL Spring Nationals are going to be like, race fans and drivers alike are going to be smiling all weekend long.


"We had 40 cars a day making passes here last weekend," said track co-owner Keith Haney, who plans to race the Spring Nationals himself. "At my own test, my Lucas Oil Chevy Camaro ran a 3.95 second pass at 186 mph to the eighth-mile. It was incredible and got us all very excited. I'd jump in the car and race right now if I could."


"We've got cars from all over North America that are converging on the track for this race," Haney said. "Many of them tested last week and left their rigs at the track. The X-DRL crew got here this week to start their work, and the excitement has been building ever since."


To help fan the flames Haney said the track is going to give away T-shirts through a promotion on Facebook. Fans can enter the contest by going to facebook.com/TulsaRacewayPark or the X-DRL's fan page on Facebook and like and share the special photo posted there to enter to win a shirt.


"We did something similar on a ticket giveaway last week," Haney said. "It got incredible response, over 2,000 shares. With every Facebook user having 600 friends, more than a million people could see our post about this weekend's race. We're expecting the same excited response for the shirts."


Haney said if the excitement on the track wasn't enough with nine classes of cars racing, he said the track's midway will be packed with a whole variety of sights and sounds.


"The centerpiece of the midway is going to be Austin Dillon's AdvoCare Chevy Camaro NASCAR Nationwide Series car and hauler," Haney said. "We're also going to have Monster Energy out there, as well as a number of other sponsors in on the excitement."


The gates at Tulsa Raceway Park open at 8 a.m. CDT on both Saturday and Sunday with qualifying starting at 10 a.m. both days. Eliminations start at 2 p.m. on Sunday. 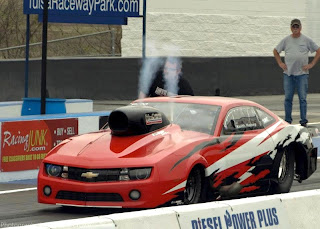 Posted by Keith Haney Racing at 8:26 AM No comments:


TULSA, Okla. (March 28) - It's been a busy winter at Keith Haney Racing, but the team's drivers know they'll be ready to go when the wraps on the new season are unveiled April 6-7 at the X-DRL Spring Nationals at Osage Casino Tulsa Raceway Park.


After a tough 2012 season, Haney and fellow driver Monroe Guest took their Chevy Camaros down to bare bones for a total make-over.


"We've had a big offseason," Haney said. "We learned a lot last year, and the cars turned a corner at the end of the year and made some good numbers. During the offseason we found some issues in the wiring of the cars that might have hurt us.


"We both cars completely rewired from the taillights all the way to the crank trigger. We are totally ready to roll."


Guest said the new wiring will help the cars in a number of ways.


"I'm feeling real positive about what we've done over the winter," Guest said. "We didn't perform the way we wanted to last year and the winter allowed us to take a real hard look at the cars. The shorts in the wiring system caused the car to not spray the nitrous correctly. Changing the wiring also allowed us to lighten the cars quite a bit, which will help our performance tremendously.


"It's going to be exciting to see what these cars can do because they are like brand new again."


Haney said he's brought back a lot of the personnel who helped him at the tail end of last season.


"We're prepared now. We didn't do a whole lot of changes to the powerplants," Haney said. "We did change our transmissions and our gear ratios. What we've got now is real promising.


"Doug Riesterer, who is the fastest Pro Nitrous guy in the country, is still tuning our cars. Brandon Pesz and the guys from Lethal Acceleration, who helped us to our best numbers of the season last year, are also helping us again. We're not going through all the pains and agony we went through last year."


The next step is to test this weekend at Osage Casino Tulsa Raceway Park, a track Haney co-owns, and see how well all these changes will work under race conditions.


"We didn't start racing until the middle of the season last year," Haney said. "And we did good. As a startup team we won more rounds of racing than most teams do in two years.


"We've got Lucas Oil coming on board with us as a major sponsor on our racecars and this team we've put together should be a dominant force right from the start."


Guest said it's going to be fun to open the season with a race in his own back yard.


The X-DRL is going to bring another level of excitement for fans and drivers of doorslammer cars," Guest said. "We're going to get to try some different tracks and get a chance to win a championship in multiple series.


"It's great to have such a big spotlight shown on Osage Casino Tulsa Raceway Park and we're excited to start the season here."


Tickets for the X-DRL Spring Nationals are still available and can be purchased at either www.x-drl.com or www.tulsaracewaypark.com.
Posted by Keith Haney Racing at 8:24 AM No comments: