TULSA, Okla. (Aug. 24) -- The Redemption No Prep series, born and raised in Texas, is going on the road.
Osage Casino Tulsa Raceway Park will host a No Prep race the weekend after Thanksgiving, Nov. 25-26, the track announced Thursday.
The Redemption No Prep series is a grassroots organization led by Shannon Morgan, designed to give everyday racers a chance to show their stuff in an affordable, professional setting. 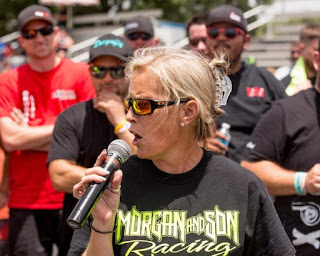 The Redemption No Prep series is a grassroots organization led by Shannon Morgan.
"This particular type of racing is what it's all about," track co-owner Keith Haney said. "For me, this is for the people who may not be able to compete on the pro level, but they can come and compete on the No Prep level."
That's the idea, said Morgan, who has organized other drag races in the past, including Grudge, Index classes, big tire, small tire, and 10.5W events. Her husband owns Morgan & Son Racing Engines, a shop he and his father started 30 years ago, and she works side by side with him every day.
Through the years, Shannon Morgan developed a soft spot in her heart for everyday racers, those who couldn't afford big-time drag racing.
"I just wanted my guys to have a place," she said. "They are racers who got run out of Drag Radial racing and 10.5W racing because of big-money teams. They had nowhere to be, but this is perfect."
The No Prep idea has been around for some time, mainly to get illegal street racers off the street and onto a racetrack. The early events were mostly private, when a group of racers would rent a track and race legally. Over time, the concept grew, and now races are open to the public.
"I went to one of those races and thought, 'Hey, we need this back home,' " Morgan said. "We had so many racers here in the South."
Morgan began working on a series in Texas, talking with friends and associates at Texas Raceway.
"I said to them, 'I have this crazy idea I want to do,' " Morgan said.
The track agreed, held the race, and it was a success.
"I said at the start of Redemption No Prep three years ago that I wanted to be the Valdosta (Ga.) of No Prep, and I thought it would take three or four years," Morgan said. "That's what I want to be. That was my goal, and here we are with our sixth race, and we've moved from the small track to the big track. This is the first step in that goal, and with over $100,000 in payouts, that's not a bad way to start our first race at a big track."
Valdosta holds the Lights Out 7 Drag Radial race that has become one of the biggest draws in the sport. Morgan's no-nonsense style is a big reason for Redemption No Prep's success, and she instantly won over Haney, the master promoter. 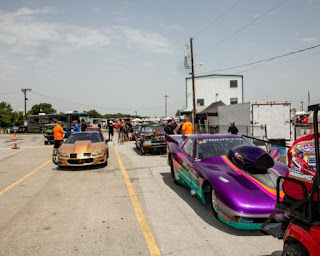 Redemption No Prep is designed to give everyday racers a chance to show their stuff in an affordable, professional setting
Morgan had tried a big-name track in Texas but got the runaround. She found out another series was invited to that track, so she decided not to pursue a No Prep race there.
"I wanted Redemption to be the first at the track I picked," Morgan said. "I took my little butt to a race and walked right into his trailer and said, 'This is what I've got, this is what it costs, this is what I want to do. What do you want to do?"
"I'm all in," Haney answered.
Now, Tulsa Raceway Park aims to grow the No Prep series into a larger event. Haney, co-owner Todd Martin, and track general manager "Big Don" wouldn't have it any other way. Since hosting the Midnight Drags event, Tulsa became inundated with requests for a Street Outlaws-type of event.
"That basically solidified our decision to have one," Haney said. "Our fans have asked us for the last three or four years to have this race: 'When are you going to do it? When are you going to do it?' We're going to give our fans what they want.
"Just about all the Street Outlaws racers have tested at Tulsa, probably 200 times. It wasn't the time to say anything about it, but now we're going to do it. We decided that if we're going to do it, we're going to do it big. We're going to have a live feed, we're going to sell sponsorships, and we're going to have vendor rows."
Morgan expects 150-plus cars in all sorts of classes, and she's not worried about post-Thanksgiving blues. Instead, she's counting on history for a big race. An earlier No Prep race was postponed by rain until after Thanksgiving, but it worked out well.
"It's the end of the year, and everybody shuts down for the winter," Morgan said. "Most people are off work, so they don't have to take off work; our racers are blue-collar people. Their wives and mothers and such don't care that they're leaving because they're out shopping on Black Friday."
For more information, visit www.redemptionnoprep.com. 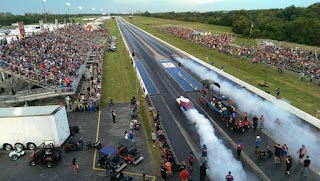 Posted by Keith Haney Racing at 8:43 AM No comments: