VALDOSTA, GA (February 22, 2018) – Straight out of the box after winning the Mid-West Pro Mod Series Radials vs. the World championship last fall, Keith Haney drove his nitrous-boosted 2016 Camaro to an impressive runner-up finish Feb. 18, at Lights Out 9, the biggest and most prestigious standalone drag radial race in the world. After qualifying eighth for the 32-car RvW field at South Georgia Motorsports Park, the Tulsa, OK-based new car dealer defeated four worthy rivals before coming up just a little short of Georgia’s own “Stevie Fast” Jackson. 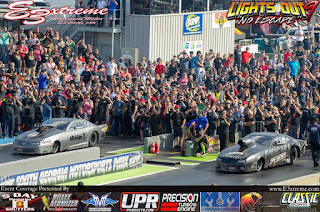 "Amazing. To come out here and run like this and get to the finals when everybody said I wouldn’t, and make career-best runs in this car, well, it really couldn't be much better," Haney said shortly after covering the SGMP eighth mile in 3.77 seconds at 199.52 mph, compared to 3.74 at 199.67 for Jackson in the $50,000-to-win final round. "We didn't do any testing before coming here. None whatsoever—and everybody knows it—so my team, I just couldn't be any prouder of them.
“And the fans, they were great to us this weekend and I feel like we gave them the show they deserved and were looking for. That’s what it’s all about out here; it’s not about going fast and stroking our egos and winning money, it’s about making sure the people who come out here to watch the fastest, baddest guys on drag radials on the planet have a good time and want to come back for more. And I think we did that.”
Haney immediately made his presence known, ending Thursday night’s opening round of qualifying with a class-leading 3.85 pass at 196.62 mph. Jackson took over the qualifying lead in Friday’s lone session with a 3.78-seconds effort at 198.06, but lost the point on Saturday afternoon to teammate Jeff Sitton, who ran an identical elapsed time to Jackson, but earned the official number-one start based on going less than one mile an hour faster.


Once eliminations began Saturday night, Haney actually caught a break in his first-round pairing when Jeff Shawver’s ’67 Camaro stumbled off the start. Meanwhile, Haney’s car hooked up a little too much and launched into a huge wheelstand that he caught just in time to salvage a 5.56-seconds pass at just 122 mph. 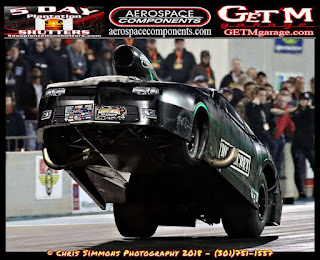 Things went much better for him in round two with a 3.86 win over Paul Major, followed by an even quicker 3.81 quarter-finals victory over Kenjo Kelley. In the semis, co-crew chiefs Brandon Pesz and Brandon Switzer finally got Haney into the 3.70s, but it was the driver who won the race with a .031 holeshot that allowed his 3.79 at 198.47-mph combo to beat a slightly quicker 3.78 at exactly 198 mph by Canadian racer Paolo Giust in the opposite lane.
“I can’t say enough about my guys,” Haney stressed. “With the exception of the 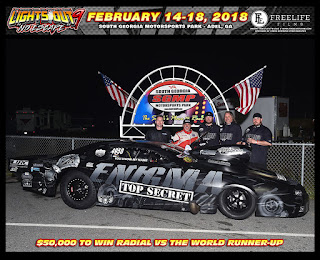 wheelie they got me down the track every single pass, but even there we learned something that made us go faster again later.”

Meanwhile, on the opposite side of the ladder Jackson plowed through Lyle Barnett, Enzo Pecchini, Ryan Martin and Tim Slavens, going quicker and faster in each round. With lane choice for the final going to the quicker elapsed time from the semis, Jackson put Haney in the left lane for the first time in eliminations.
Once the tree turned green, Jackson left first and held the lead in a race that saw Haney cross the finish line just 82-thousandths of a second behind. Still, the Tulsa-based new car dealer remained upbeat about his first race outing of the year.
“That was the first time I was late on the tree all day—and it wasn’t because of him—that was all me; I was late and that happens sometimes,” Haney said. “Congratulations to Stevie on a good race. And at the end of the day, between the grudge race Stevie and I did in qualifying and the way things ended today in the finals, I think what we did for drag racing is what's really important.
“In my opinion, and I think a lot of people would agree with this, I think this was one of the best radial races we've ever seen. And that's including everything, the talking crap leading up to it, the videos on Facebook, the trash talking and the betting at the track, it's all part of the bigger show. It all came together exactly as planned; it just didn't work out in my favor.”
Keith Haney Racing will be back on the track Mar. 2-3, at the Texas Motorplex, 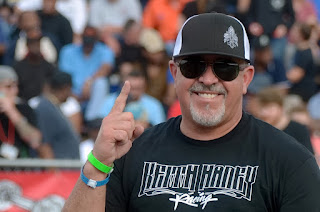 near Dallas, where Haney will race in the Pro Mod category and Street Outlaws star “Daddy Dave” Comstock will drive the KHR Radials vs. the World entry in the Bruce Lowrie Chevrolet North vs. South Frankenstein Pro Mod Shootout for the Mid-West Pro Mod Series 2018 season opener.

TULSA, OK (February 9, 2018) – Vowing to “drive his car better than he does,” veteran street racer “Daddy Dave” Comstock has agreed to step into

“Keith knows I can drive and I’m real competitive and more than ready to push things right to the edge,” stated Comstock, a regular on the Discovery Channel’s runaway hit Street Outlaws TV show. “I’m going to drive it like it’s my own and I’ve been known to grenade stuff before in order to win, so …,” his voice trailed off. “No sense in leaving anything on the table.”
Haney said he expects nothing less. “Dave is an aggressive driver, a good driver, exactly the kind of guy I want in there. It’s a proven car, a race winner and a championship winner, so he better do at least as well as I did,” he countered with a laugh.
Though he’s raced in the past at the Motorplex and is familiar with most of the MWPMS drag radial competitors, Comstock said he’s never attended an MWPMS

race before and is looking forward to the experience. “Any time you can race against those types of guys, I’m in.”

In the Pro Mod class, Haney will be driving “Notorious” at the Motorplex, the nitrous-boosted 2016 Camaro in which he also won the 2017 MWPMS Pro Mod class championship, while Comstock will race “Enigma,” a nearly identical-appearing Camaro that

scored a race win and the RvW title last year. The biggest difference between the two are the giant, 17-inch wide racing slicks bolted to the back axles of Haney’s ride compared to relatively narrow drag radial tires out back on the car Comstock will pilot.

“I run the big tires on the street with my car,” Comstock said of “Goliath,” his TV-famous ’63 Chevy II. “And I usually leave them on whenever we go to the track, too, but I do get my car out on radials a couple of times a year at Donald Long’s big races, so they’re not a mystery to me.”
Both Haney and Comstock will be racing their own cars at Long’s Lights Out 9 event Feb. 13-18, at South Georgia Motorsports Park, where Haney suggested Comstock might even make a test run or two in “Enigma.” However, while he

admired Comstock’s confidence, Haney cautioned his latest racing partner not to assume too much before climbing into a car that covers an eighth mile in 3.8 seconds at 200 mph.

“This ain’t no street car—outlaws or otherwise—this is one badass Radials vs. the World machine with more horsepower than he’s ever strapped his ass into before,” Haney said. “This car is quicker and faster than anything Dave has ever driven, so I just hope he knows what he’s doing. When he gets to the Motorplex he’ll be going up against the very best of the best. Guys like DeWayne Mills, Daniel Pharris, Mark Micke, Mark Woodruff and whole bunch of other guys who are no pushovers. All I can say is he better be ready.”
If all goes well in Texas, the MWPMS outing may represent one more step toward Comstock reaching his ultimate goal of taking on NHRA Pro Mod competition.
“I could jump in a car tomorrow and go NHRA Pro Mod racing. But the thing is the show has me wrapped up for a few more years,” he explained. “I’m under contract on paper, so I have to ride that thing out. I mean, I enjoy making TV, and street racing, I love it, but as soon as that’s over I’ll be sitting in a Pro Mod somewhere. For right now, though, I just want to thank everyone at Keith Haney Racing for the opportunity.”
On-track testing for the Bruce Lowrie Chevrolet North vs. South Frankenstein MWPMS Pro Mod Shootout begins Mar. 1, with qualifying and racing scheduled Mar. 2-3, at the Texas Motorplex in Ennis, TX.
ABOUT THE FRANKENSTEIN ENGINE DYNAMICS MID-WEST PRO MOD SERIES
The Frankenstein Engine Dynamics Mid-West Pro Mod Series is an all-eighth-mile, no-profit organization that typically competes during each host track’s biggest event of the year. Its appearance is entirely funded by sponsorships passed along to benefit the host tracks (typically about $10,000). The Mid-West Pro Mod Series also provides trackside sponsor banners to be displayed at each event, on-site PA sponsor announcements, and links to each company on the MWPMS website (www.MidWestProModSeries.com), plus an extensive social-media presence, texts and e-mail blasts, and commercials during all events. Complete class rules are posted on the MWPMS website. Frankenstein Engine Dynamics (www.Frankensteined.net) offers access to a professional install shop with a multitude of services including custom CNC porting and machine work, chassis dyno, engine dyno, Spintron, and additional customer service and support.
Posted by Keith Haney Racing at 1:32 PM No comments: