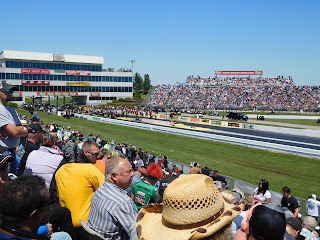 With four of eight scheduled MWPMS events already in the books, Ron Muenks, winner of the most recent MWPMS race at St. Louis late last month, holds the 2018 Pro Mod points lead. Not far behind is Jonas Aleshire, who won at Tulsa early in May, with Jim Sackuvich, Todd Martin and Aaron Wells rounding out the top five. Defending class champion Keith Haney fell out of the top-10 after business demands forced him to miss the prior two events, but as MWPMS owner and promoter he remains excited about the coming Topeka tilt.
“This is a big race for everyone,” Haney says. “We’re heading into the second half of the season, so the end will be in sight sooner than you think. This race in Topeka represents a chance for the guys up front to put some distance on the competition, but it’s still not too late for someone further back—like me—to put a big come-from-behind charge together. Topeka better be ready for some fireworks—and not just on Saturday night!”
The event also could be significant for competitors because it will count toward earning a discounted entry fee for a huge, $50,000-to-win Pro Mod race Haney plans to stage this November after the official MWPMS season concludes.
“One of the biggest things for this race is if you're a Mid-West Pro Mod Series racer and you've entered four or more races this year, your entry fee is going to be less. We want to give back to those supporting the series the most,” Haney explains. “That said, on the other hand I don't want to exclude anyone. I mean, maybe you live on the other side of the country but you’d still be interested in racing for $50,000; that just means your admission will be a little bit higher. Not ridiculous, but it's going to be higher because you’ll be racing for the biggest Pro Mod purse next to Wes Buck’s World Series of Pro Mod race, which is an invitation-only event; this is not.”
Haney says he’s already lined up a major sponsor for the $50K race and there will be a $15,000-to win secondary race for those who fail to qualify for the 16-car main event. He also points out this will be a Pro Mods-only event, so track

preparation will be geared solely toward making their big, meaty slicks dig in. Negotiations to finalize the venue continue, he adds, with more announcements to follow.

“Our Mid-West Pro-Mod sponsors, our marketing partners, our racers, fans, tracks, even the media members who come out to photograph and video us have all been so good to us all year long that we just want to have this big, end-of-season blowout to say thank you,” Haney says. “We really appreciate the support and that’s why this race in Topeka holds so much importance. And with four races left in the season it’s not too late for anyone to still earn discounted admission to the $50,000 race.”
Haney stresses, however, that to qualify for the discount a team’s attendance does not have to be at consecutive events. Someone who entered just the season opener so far could just attend three of the four remaining races, or after attending two events in the first half of the schedule, they would need only two more in the second half to receive the lower entry fee.
“Of course we hope everyone attends all four remaining events, but as a racer myself I know that’s not always possible,” says Haney, acknowledging even he needs at least two more MWPMS appearances this year to earn the discount. “We just want to reward those who support what we’re doing with the Mid-West Pro Mods.”
For the Heartland Park event, Mid-West Pro Mod Series testing will be held from 10 a.m. to 4 p.m. on Friday, followed by a test-n-tune session for other classes. MWPMS competitors will enter their first round of official qualifying at 7 p.m., with round two following at 9 p.m. to close out the day. Round three of qualifying is set for 10:30 on Saturday morning with the fourth and final session set for 12:30 p.m. Pro Mod eliminations are scheduled for 5 p.m., 6 p.m., 7 p.m. and 9:30 Saturday night.
Following this weekend’s event at Topeka, the Frankenstein Engine Dynamics Mid-West Pro Mod Series will return to action with its full slate of classes Aug. 2-4, at Gateway Motorsports Park, near St. Louis.
-- END --

ABOUT THE FRANKENSTEIN ENGINE DYNAMICS MID-WEST PRO MOD SERIES
The Frankenstein Engine Dynamics Mid-West Pro Mod Series is an all-eighth-mile, no-profit organization that typically competes during each host track’s biggest event of the year. Its appearance is entirely funded by sponsorships passed along to benefit the host tracks (typically about $10,000). The Mid-West Pro Mod Series also provides trackside sponsor banners to be displayed at each event, on-site PA sponsor announcements, and links to each company on the MWPMS website (www.MidWestProModSeries.com), plus an extensive social-media presence, texts and e-mail blasts, and commercials during all events. Complete class rules are posted on the MWPMS website. Frankenstein Engine Dynamics (www.Frankensteined.net) offers access to a professional install shop with a multitude of services including custom CNC porting and machine work, chassis dyno, engine dyno, Spintron, and additional customer service and support.
Posted by Keith Haney Racing at 2:56 PM No comments: